Textbook Middle Child. Gluten Enthusiast. I document my adventures travelling and eating in a food blog for the Daily Prophet.

Hard things are worth doing.

A series of vignettes about the NICU.

The first chapter of this was written for MalfoysAngel's More than a Stereotype Challenge.

A story about Rose's first day as Head Girl.

A companion piece to A Woman's Place.

The Dancing Fairy by MadiMalfoy

Katie Bell doesn't expect her Saturday night out to change from the way it's gone the last five weeks.

Alicia Spinnet is willing to bet she can change that.

*Third place in grumpy cat's The Pick Up Line Challenge*

All the Words Left Unspoken by apondinabluebox

Companion piece to ‘The Letters to No-One’ but can also stand alone. Written for just.a.willow.tree’s Epistolary Fic Challenge. 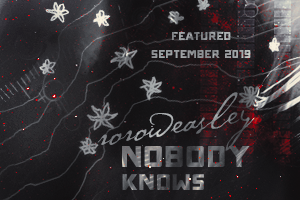 Aesthetic made by me. Featured fic graphic made by @grumpycat.

A Christmas in Azkaban by shadowkat678

Hope is like a flickering candle. It can be snuffed out, but it can also be relit.

The Christmas Eve before Sirius' escape, an unlikely encounter with two young Aurors drags up memories of a time thought forgotten long ago...

Odd Weasley Out by Dojh167

banner by snicket! of TDA

Percy struggles to find comfort within is own skin and his family as he balances his relationship with his boyfriend Oliver and the strange new force in his life called Aud.

As far as Louis Weasley is concerned, life couldn't be better. He has his family, a decent job, and Tessa, his not-quite-girlfriend. In a few months, he'll have enough money saved to buy a place of his own. His life is right where he wants it to be.

But life, as it so often does, has other plans.

Fortune and Glory by northbound24

Jimmy Teague has it all, a loving wife, a newborn son and friends.

And he's only just left Hogwarts. Not bad going.

But his father's life's work may trip him up.

Jimmy's gonna need a pot of ale after this.

Genre: AU
Themes: Fate/Prophecy
Inclusivity: None
Advisories: None
Series: The Other Heir Series, Ravenclaw Stories of the Month

A Woman's Place by Chemical_Pixie

There are thirty-nine known members of the Order of the Phoenix. Only twelve of them are women.

She's a Muggle-born rebel who needs to be a conformist. He's a pureblood conformist who wants to be a rebel. They're an unlikely team, but helping each other is essential if they're going to make it through Voldemort's new regime alive.

That's All by beyond the rain

A witch hides from the society that shunned her for being a muggleborn...and a slytherin. That is until two broken men, fighting on opposite sides of a war, give her no option but to return to the wizarding world.  Magic hasn't managed to convince Clara that she belongs, but friends are more persuasive than any sort of spell.

Seven is the most magical of numbers.

This is the life of Sirius Black, told in thirteen paragraphs, written in a multiple of seven words each.

A Gift for Joey

Genre: Dark/Horror, Microfiction
Themes: None
Inclusivity: None
Advisories: None
Series: None

Love in Three Acts by toomanycurls

Love in three acts: friendship, romance, betrayal. The story of Sirius and Remus.

All the truth about Jimmy Portman by Felpata_Lupin

Destiny is the result of people's choices. And any single choice can change it completely.

In this AU the Marauders are still alive and free (more or less...), Neville Longbottom is the guy with the scar, and Harry... Well, just read and find out!

Sometimes, in Hester’s half-sleep when her limbs are leaden as coal scuttles and her thoughts are arrows strung on bows but never released, she suspects that Anna never really fell, that the infamous scarlet aviator coat was wrapped around nothing, a rag spun into a steaming abyss.

Nobody comes back from the Sunless Country.