Harry Potter and his friends struggle to move on with their lives after the Second Wizarding War.

The Life and Times of Leander Cross by juls

A series of stories about the vampire, Leander Cross. Born in and created in the Fifteenth century. (A sort of history lesson, if you will)

Banner by the Author.
A Fic set in the Tripods universe created by John Christopher, between the destruction of the third City of the Tripods/Masters and the Conference of Man.

The Masters are defeated and gone. Will has bought and restored a ship, but before he goes on his voyages, he has another more personal journey to make. Returning home for the first time, a forgotten past catches up with him, while the world around him deals with recovering from and the wreckage of a century of occupation.

When the Walls Won't Hold by 1917farmgirl

Merlin reacts on instinct to save Camelot and Arthur from an ancient curse, in front of Uther Pendragon. And now suddenly destiny is unraveling and nothing will ever be the same again.

The Stargate at DoM by potionspartner

Everyone knows that the Department of Mysteries has a secret collection of magical artifacts of varying degrees of danger and power. When Voldemort has taken over the Ministry of Magic, he discovers one of those secrets is a Stargate. Now he has plans not to just take over Earth but the entire Galaxy.

Harry Potter is still going to save the Wizarding World. He just needs a little help from SG1 to do it.

Orff has gone to seek his fortune in Tin Pan Alley, leaving Justicia to the clutches of the mob boss, Ricardo Bogati. 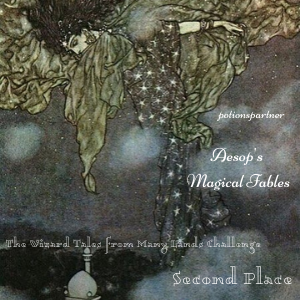 Crossroads of Destiny by potionspartner

He was a skinny, abused eleven year old with stringy black hair eagerly awaiting the day he could escape from his family and Cokesworth.

She was a grey eyed nineteen year old who arrived in Cokesworth trying to put the horrors of her past behind her.

Each one had secrets which they dared not reveal.

Yet fate decided that their destinies would meet at a crossroad.

Waiting for the Light by 1917farmgirl

Magic is a gift. A tool to change the world. But the wizarding world has fallen into a new age of darkness and fear, walling itself away. Scorpius Malfoy tried to fight that once, and lost.

Maybe he can’t change the wizarding world. But the Muggle world is full of evils that can be undone by one man and his wand. At whatever cost.

A drabble for the 2018 Halloween Maze

Rage, I Rage by Pixileanin

For Rumpelstiltskin's A Poetical Mood Challenge

Then she saw it.  Two broken, wavy lines across the top of his wrist, not pink from the coffee spill, but actually glowing from under his skin.  At the same time, she felt her own wrist burn like it never had before.  The marks were shockingly familiar, like the underside of her own arm. They matched hers.

No.  It couldn’t be this man.  There had to be some mistake.

Written for Madimalfoy’s “The Soulmate AU and Random Prompt Challenge”

Entered in Sapphicsunrise's "The Vocational Challenge"

Some people need only a single second chance at life to realign themselves with who they wish to be. Others require many more second chances.

This is a tale of the latter.

On the Death of Alexander Hamilton (v3) by BlackPixie

You have no control, who lives

Who dies - who tells your story