Beyond the Hedgerow by juls

Angry at her sister and cousins, Lucy has an adventure in a magical land that she's only dreamed of.

written for Beyond the Rain's 'Underrated Character Challenge'.

It's no secret that magical libraries can be strange, even dangerous places. When the Hogwarts library starts behaving even more oddly than usual, Hermione Granger, curse breaker and book aficionado extraordinaire, is just the woman for the job. But why does she keep running into Snape at every turn?

Given a task, Charlie is soon off into a new world where new dragons abound.

Crossover of the Harry Potter Universe and How to Train Your Dragon.

banner by the fantabulous grumpy cat

A Picture of Christmas by Simplicius

Genre: Crossover
Themes: None
Inclusivity: None
Advisories: None
Series: None

The Challenge Drabbles by 800 words of heaven

A series of drabbles written for challenges on HPFT.

The Great S.P.E.W. Bake Off by juls

banner created by the talented crowsforbros

Hermione decides to hold a Bake Off for her favorite charity.

The Great Pawneean Bake Off by kuusi palaa

A Parks and Recreation AU Tale.

Captain Harry J. Kirkter of the Federation Starship, Gryffindor, despises two things: a ship full of Death Eaters and puffskeins. So what happens when you mix the two and add a vat of butterbeer. . . A lot of problems with puffskeins. 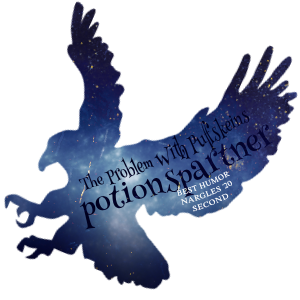 Harry Potter and the Stargate by WindingArrow

On a routine mission to secure the Stargate on an alien planet preceding the arrival of SG-1, SG-2 encounters a strange woman who, with a single word puts one of Major Griff's men in excruciating pain and takes one of his team members hostage. After debriefing back on Earth, General Hammond is forced to bring in top secret specialists from England to accompany SG-1 on their mission. Not only do they have to rescue Dr. Warren, but Captain Carter and Dr. Jackson are determined to uncover the secret behind the strange transporter-like readings travelling back and forth from the planet to Earth.

For David: Muggle superstitions usually mean they skip the 13th floor in all buildings. But not the one Harry has decided to move into. All manner of things happen in Apartment 13, but will Harry be able to survive them? The fate of the new world is no longer Harry's to worry about. Now he has to fight for his own fate. ***Written for SAYS Facebook Fic Exchange***

Wherein Sam fails to explain the Muggle concept of 'zombies', Jack has a boyfriend (he's in Canada) and Maxine loses a game of gobstones on purpose.

Healing the Dreamer by pookha

Luna Lovegood travels to Henrietta to help heal Ronan Lynch and stop the nightmares that are manifesting in parallel worlds.

Part 3 of "Luna Crosses Over".

Beyond the Veil and into the River of Death by pookha

The necromancer George Krupp has been summoned to the Department ofMysteries to examine the archway in the Death Chamber. Apparently, it's leaking. When he travels beyond the Veil, it's not at all what he expects.

Warning: This will have extensive spoilers for my story 'Bodies at Rest'.

King George III has a rather eventful day when he's cursed. By magicians. Several years later, a dragon lands in his garden...

Escaping the Maze by 1917farmgirl

A single event can set in motion a domino effect beyond imagining, entwining lives and shattering worlds, ensuring that nothing will ever be the same again.

In Dread Hogwarts... by pookha

As the moon becomes full, it is time for the student-kine to make their perilous journey to Dread Hogwarts where Cthulhu lies dreaming.

Out of Time by M C Crocker

Marcus Cole is a man who doesn't believe in magic. It is nothing more than legends and fairy tales,  most of it deriving from his home country England. Of course, other worlds have their own forms of magic and mysticism but nothing compares to that of Earth.  However, a freak accident pulls Marcus out of his time and space throwing him back to the 1970's on Earth where he learns a history he knew nothing about.

Mac Taylor takes great pride in his team, a team that functions more like a family than a group of co-workers. But what happens when the newest member of that team has a dangerous secret - one that could threaten the very lives of those he holds most dear? This story is an unconventional crossover with Harry Potter. Team Fic, featuring Mac and Adam strongly. Adam/OC.

An Age of Change by M C Crocker

Varric is visited by an almost forgotten friend who tells him that world as they know it might be in danger once more and his help is needed to stop the Assassins and new Templar Order from creating an even bigger mess of things.

Image by Vault-Tec of Shadowplay

The Lark and the Nightingale by Felpata_Lupin

A sixteen-year-old witch. Her best friend, who's been secretly wishing to be more for years. A school project which is going to change their relationship. An ancient curse which could doom their lives...

Disclaimer: Some characters/ideas in this story are taken directly from Shakespeare's play Romeo and Juliet. Some ideas are also inspired to the movie Lady Hakwe.

Stunning banner by the amazing WriteYourHeartOut. Thank you so much, Tanya!

Problems With Pygmy Puffs by TreacleTart

Fred was just about to step closer for a better look when Verity burst out of the pile. Horror was clearly written on her face.

"The piles. They're all pygmy puffs! There are thousands of them. The entire storage room and both of your offices are completely full."

Genre: Crossover, Humor
Themes: None
Inclusivity: None
Advisories: None
Series: None

The Hogwarts Diversities Program by ImaRavenclaw

Alliah (shadowhunter, with an extra magic touch), Nicholas (Moroi with declared water magic), Jay (on the run from enemies and telekinetic.)

These three have been selected for the new Hogwarts Diversities program. It’s going to be a rough year for the existing Hogwarts students.

The Doctor and the Who by WindingArrow

When a strange creature delivers a strange letter to a boy in Single Level Complex 6, he and his best friend embark on a great adventure through time and space, meeting many strange people on the alien planet, Earth. With only the creature to guide them, the eleven year old Doctor searches for a wand to choose him.