The Rise of the A.W.L. by Margaret

When a teacher's secret is revealed, a campaign begins to have them removed from Hogwarts. But how much support does the campaign have within Hogwarts and what lengths are the campaigners willing to go to?

Thanks to SpoonyLupin for the banner.

This story is a sequel to, and contains spoilers for, The Writing on the Wall.

Love can happen anywhere, anytime, even when social distancing and you should stand six feet apart.

Neville assessed that Hugo's decision-making skills came from Hermione. It was thanks to Hugo that Neville made a new discovery. Banner made by starship2016

A Place Not Far From Here by kuusi palaa

When I Go Out With You by sinnersandsapphics

Trust Me by Oregonian

In the final minutes of the war, Hannah trusts Neville to know what to do.

The African violet on the windowsill catches her eye again. It is dying, or perhaps it is already dead. She wonders if African violets are like dogs that yearn after their absent masters.


Originally written in 2009 for a staff challenge on HPFF about killing off a favorite character.

Genre: Hurt/Comfort
Themes: Dying/Grieving
Inclusivity: None
Advisories: None
Series: None

Through all of it, through the fear, the devastation, you held onto your hope, nurtured it lovingly like you would have the baby you longed for. * To Hannah Longbottom, happiness doesn’t come naturally.

That's What Friends Are For by Pixileanin

Neville Longbottom wants to get married.  Was that so hard?

Neville ventures back through his memories of how his relationship with Hannah began a few months ago.

Anthony has always loved celebrating Hanukkah with his family. This year, with war darkening the world around him, he finds new meaning in the festival of lights. 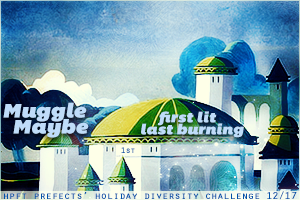 Chai, Dancing, and a Friend in the Wee Hours of the Morning by 800 words of heaven

It had sounded like a good idea at the time.

Neville/Hannah | 3.5 in the Chai Series

Banner by beyond the rain

In the end, war heroes are, too, only humans.

An Everyday Hero by pookha

They were living in a war.

I love you could be said another day.

The young man speaks, but his words confuse me.  He tells me that it's mother day, something that I had failed to remember. I mean why would I really? My mother is long dead and my husband and I have never been lucky enough to have a child.

A Lovestory of Pansies and Leek by Jo Raskoph

Love is looking at someone’s face and feeling like coming home—well, it is for most people.
When Neville Longbottom stands waiting in front of Florean Fortescue’s Ice Cream Parlour he can’t remember the face of the woman he is waiting for, but he thinks she might be the love of his life.

written for the "diversify canon" challenge

Chai, Pakoras, and a Friend in the Wee Hours of the Morning by 800 words of heaven

He’d woken up just after vanquishing the beastly plant, but before he could share a victory smooch with his favourite blueberry muffin-wielding warrior witch.

Neville/Hannah | Fifth in the Chai Series

Chai, Chutney, and a Friend in the Wee Hours of the Morning by 800 words of heaven

"We should get married," Neville mumbled.
Hannah took a few deep breaths, probably to clear her airways of any errant tea. "For a chutney recipe?"

Neville/Hannah | Fourth in the Chai Series

Chai, Carrots, and a Friend in the Wee Hours of the Morning by 800 words of heaven

Neville was pretty efficient when came to pruning plants. Did girls find extreme pruning to be an impressive feat?

Neville/Hannah | Third in the Chai Series

Chai, Zebras, and a Friend in the Wee Hours of the Morning by 800 words of heaven

"Did you make a wish?" she asked as he stood up straight again.
"Yup," he replied, giving her hand – which he was still holding – a squeeze.
"Are you going to tell me what it was?"
"Doesn’t that negate the wish?"

Neville/Hannah | Second in the Chai Series

Chai, Samosas, and a Friend in the Wee Hours of the Morning by 800 words of heaven

She didn't know what she was doing with her life, but at least she had chai, samosas, and a friend in the wee hours of the morning.

Neville/Hannah | First in the Chai Series

Hannah always buys flowers after fighting with her husband.

Written for Cissaflake's The Ultimate One Shot Challenge at fanfiction.net

The Ten Year Anniversary of Dumbledore's Army by FireOpal

On the tenth anniversery of the D.A.'s founding, Hannah Abbott meets up with most of the other remaining D.A. members to celebrate, remember and mourn. Hannah gets to save the day, reconnect with old friends, and maybe even rekindle an old crush...

Featured story in February 2017, thanks to AbraxanUnicorn! <3